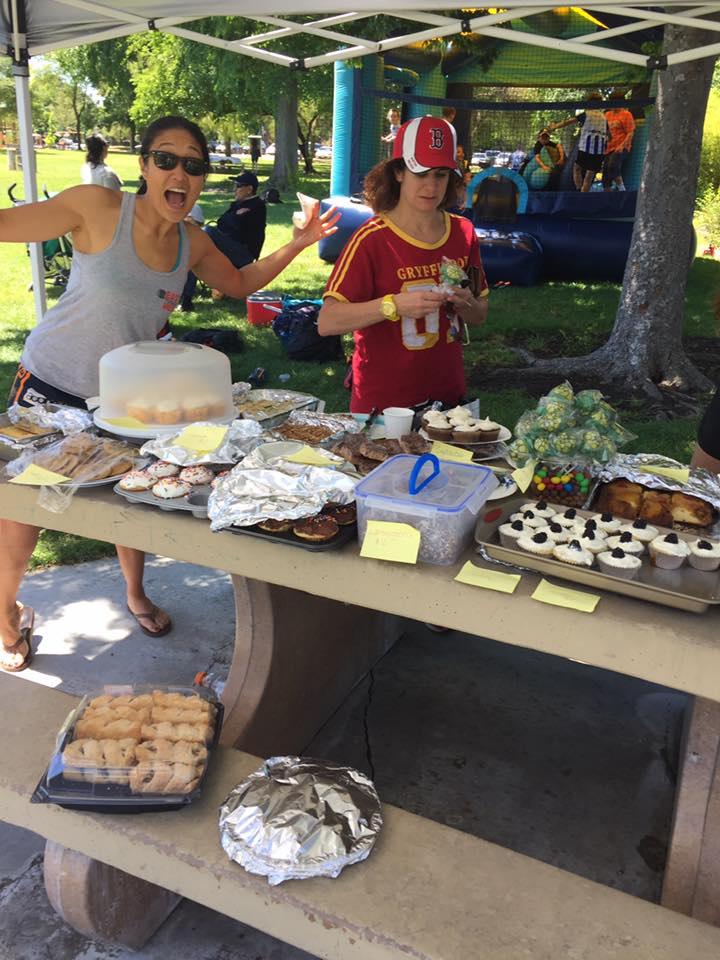 Bake Sale and Bounce House Fun at Family Day
2017 GGAFL Family Day started off with a women’s match up, between the newly formed Oakland Pond Turtles and the 2016 defending champs San Francisco Sirens.  The game started off with some clutch link ups for the Sirens to get on the board first. Robyn and Bretto dominated the forward line for the Sirens with great leads that lead to goals (3 goals each).  The Turtles had a spark in the second half with Smo entering the game (telling time is hard).  New comer Cashews, for the Sirens, turned into a quick threat with great vision and voice. The Sirens took the day and are in the top position on the leader board.
FINAL SCORE
Sirens:   8.2.50
Turtles:  1.2.8

Next up, a battle of the two most successful teams in men’s GGAFL history: the SF Knights and the Mavs. As the sun rose higher in the Concord sky, so did the stakes on the day. With the Seals and Pirates continuing to win each week, one could feel the pressure mounting for these proud squads. A loss would really put a dent in their Grand Final dreams.

The first quarter started with a very American midfield battle. The Knights showed strength inside with ruckman Big Boy Bo, GGAFL legend Mel Chen, draftee Kyle Johnson and newcomer Bryce “Not Lancaster.” The Mavs countered with even more USA blood, including Bryan Dragus in the ruck, Ace Franco and Jake Khakis Aulner following, and Cody Buurrrrrrrnman anchoring the four. Somewhere in the background, Leigh Barnes was so excited that he needed a new pair of shorts.

The Mavs started strong as expected, with some great ball sharing between Dragus, Matt Lege, and Ace. They also passed the footy quite well. With some additional help from Dan The Man Livy and Jakey Ryan, the Mavs were able to kick the majority of the goals in the first term. The Knights were not to be left behind, though. Longtime GGAFLer Matt Falkowski took a couple of strong marks in the forward line, and worked well with “Good” Sammy Cohen for a couple early strikes. After one quarter, it was Mavs by 7.

In the second, the Knights took a big hit as ruck-man Bo had to leave the game, but continued to fight hard. Captain Rick Garcia and Noamy “Also not a Lancaster” Scott showed that the original SF club had plenty of desire, winning a number of hard balls and converting to goals. The Mavs countered with a few good runs of their own, quarterbacked often by Corey “Sunrise” Irwin. Even with Jake Ryan and Dan Livy kicking another goal each, the Mavs could not break away. At half, their lead was only 12.

Lots of passion from coach Kiwi fueled a wonderful halftime speech for the Knights, so the 276 fans in attendance knew that a big quarter was coming from the 4-time premiership club. And the lads did not disappoint. Good Sammy continued to win almost every ball in the Knights forward line, and a mix of Falko and Cosmo aided in finishing a number of goals. And that wasn’t the end of Mr Cosmo. His presence started to show around the ground, and it felt as though the tide would turn for the Knights. The Mavs had other ideas however. Blake “Compass” made a number of huge tackles, and the Ryan/Livy combo kicked a couple late goals. At three quarter time, the Knights had cut the Mavs lead to just 4.

Back and forth went play in the fourth. The crowd could feel the intensity rise, as both clubs knew what was at stake. New Josh kicked a goal for the Knights, and the Mavs immediately countered from Governor Corgas. Will Brown converted for the Mavs, and then Falko rebutted. It felt as though it would go down to the wire.

With just 4 minutes left, the Knights trailed by 4 and won the tap. Kyle Johnson picked up the ball and shot for goal from way too far. Everyone knew he didn’t have the distance, but the wind gods spoke up and took the ball 20 extra meters. It flew ever closer to the goal. And went through the big sticks. Or did it? Goal umpire Jess “Scoobs” Lund was in perfect position and determined it would have hit the post. Only one point. The Mavs immediately countered with a timely goal from Jake Ryan and it was decided. The Knights could not stop the Mavs from running out the clock, and only amassed a couple rushed behinds in the last two minutes. When the horn sounded, the Mavs had won 57-49.
FINAL SCORE
Mavs:  8.9.57
Knights: 7.7.49

Game 2 of Family Day was an excellent match-up between two teams going in seemingly opposite directions: the SF Seals and the SJ Hornets. The Hornets, winners of the 2015 Premiership, have largely struggled since that dream season and have yet to get a win on the 2017 campaign. The Seals, on the other hand, are the 2017 GGAFL darlings. Numbers are growing in Sealtown and the club just gave Oakland a very tough game in Round 2, not to mention Tim Lindfelt looks like a beast who cannot be stopped and the newcomer combo of Benny the Jet and Jules are very damaging. The table was set for a ripper.

But then something weird happened, nobody wrote down anything. The GGAFL scribe saw the pies were ready, and wandered off. It was a travesty that had never been seen before at a GGAFL event. So nobody knows what went except the scores…and after one quarter the Seals led by 12.

There were still so many wonderful pies to eat, and Calicraft beer to drink, so the GGAFL scribe remained MIA. Rumor has it that Jake Ryan kicked three more goals, but nobody will ever know. After 2, it was Seals by 27.

At this point, one can only assume it was nap time for the GGAFL scribe. With a very comfy bouncy house just meters away, that would have been a very nice location for a quick snooze. Tim probably kicked a goal and the neverending Seals bench likely began to take over…but nobody knows for sure. The only facts available state that after 3, it was Seals by 28.

Maybe the GGAFL scribe went home. Must have. Or maybe he/she was on strike since the Seals had 34 more players than the Hornets and still used the draft. We will never know. But we do know the Seals ended up winning 72-38.