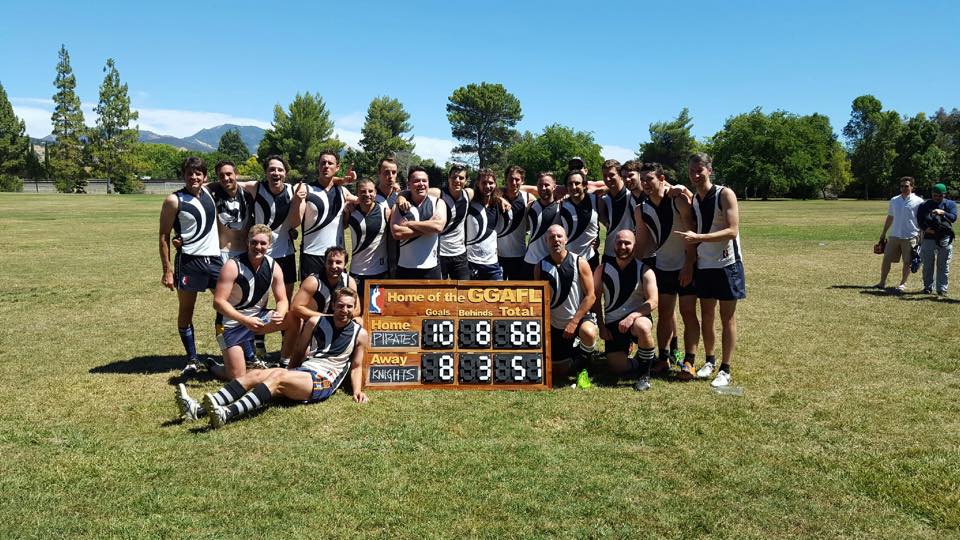 On a delectably warm day at the Concord Cricket Ground, to the GGAFL's top teams squared off for a claim to the 2016 GGAFL premiership flag. While the game took place on one day in June, the path to the Granny had started months prior with strong recruiting. The Pirates plundered and pillaged every possible YMCA in the Bay Area for available American athletes throughout the season. Similarly, the Knights looked through every Yellow Pages is available at Del Boca Vista senior citizen center for new recruits. Both teams had succeeded, and each team showed up to the final with more than 20 players, plus two Irish folks on the Knights who nobody had seen before.

The Pirates came in as the hot favorites after going an undefeated 7-0 during the regular season. The Knights were not far behind at 6-2, causing Knights coach Mr. Uppers to tell WINJ TV: “We like being the underdogs. This is a proud club and we've never backed down from a challenge, nor will we start today. If I can parallel park Noam’s Subaru without a license, we can certainly win this game!” On the other side of the oval, Pirates young gun Dahli was prepping in his own way. Dahli spent the last year playing country 40 in Victoria, and when asked about adversity, he replied, “I've been playing Footy and bagging groceries in the bush for a long time and I know what adversity the means. There's not a doubt in my mind that the Pirates will take the flag today.” The brat from Ballarat then proceeded to finish his Zima and sat down under the shade of his pink umbrella to tie his boots.

The first quarter gave a glimpse of what was to come: a very hard fought game of footy with no easy touches or possessions. Oakland ruckman Kevin Waden and SF ruckman Cosmo Kramer worked as hard as they could to give their teams an advantage, but there was no easy way out of the middle. The Pirates broke through with a couple of early points, but could not get one through the big sticks. The Knights then countered with some strong play from John Bekiaris, Irish Thing 1 and Irish Thing 2, and kicked the first goal of the game. After contest after contest, USA Revo hopeful Dan Livy was able to connect with new Pirate Jake Ryan and longtime Pirate Chris “Buckets” Johnson for a couple big goals. After one quarter, the Pirates led by 8 points 2-3- 15 to 1-1-7.

Both teams look fresh after the first break and continue to stick to their game plan.  For the Pirates it was simple, get the ball to leading goal kicker of the 2016 season Fab. With over 30 goals to his name during the season, the buttery spray model looked to add it to his tally. However, fullback for the Knights Johnno Worthley was no pushover. The two bigmen contested over and over and made it very tough on Fab. The small backs, Joshie the Kid, and floating Glenn the “Skullet” outworked the Pirates forwards and were able to turn contests into clearances often. Fortunately for the Pirates, Sammy Davey opened a confectionery early in the week and started selling candy all over the place. This included the field. His disposal efficiency and ball control helped the Pirates continue to pressure the Knights and keep ahead in the match heading to half time. On top of that, Pirates backmen Jordo, JT, and Gatesy were playing shutdown defense and would not give up much either. With temperatures and tempers rising, the Knights were giving the Pirates their first close match of the season. Going into halftime, the Pirates held a small lead of just 7 points 3-4- 22 to 2-3- 15.

During the halftime rest, WINJ TV caught up with Sammy D and inquired about his new proprietorship. “Listen mate,” said Davey, “I just give the fans what they want. I’m a man of the people. Whether it's Wing Wednesday or a load of sweets out of a dodgy, black van parked over there on the side, I have what you need.” The blonde Candyman then winked at an unsuspecting yet excited Maiden before he rejoined his team on the sideline.

After the main break, the hard tackling, contested possessions, and run out of the back line ensued for both teams. The Pirates seemed a bit fatigued and the Footy began falling into the hands of the Knights forwards. Was the Pirates relative inexperience catching up to them? Was coach Hugh Minson confused by the full-size footy after playing with an Auskick ball for weeks? Or were the Knights actually the better team? Nobody knew the answer, but either way the Knights were able to slot four sausage rolls in the quarter courtesy of 2015 Ironmonger Award winner Shooey and took the lead. A late goal from Livy and a sly, Azza-esque butt bump from Buckets on Jobbo kept the Pirates in the game. To the surprise of many spectators and tippers, the Knights went into three-quarter time ahead by less than a goal, 6-8- 44 to the Pirates 6-5- 41.

The question that wins TV reporters had going into the last quarter was "who will step up and take the game on? Would it be the likely household names of Kyle Manly Johnson, Swamp Dragon Chyna, or blue bagger Johnny Becks?” If you've been around the league much the season, you'll know that Jake Ryan is no stranger to pressure situations, especially since joining the South Bay Tinder game. Ryan's engine lifted harder and harder and faster than anyone on the ground, and despite the vallant effort of Knights taggers, Ryan still collected as many possessions during the quarter as he did Tinder matches the week before. After Ryan’s brilliant dribble kick goal from the pocket, the swashbuckling Pirates found their legs and began to take over. To make matters worse for the Knights, key Pirate forward Fab inserted himself into the midfield and began to ruck. The tired Cosmo was no match for the rested Fab, and the roving Pirates swept out of the middle more and more. David Marshy collected touches like Easter eggs, and put through a big goal. Harry Borthwick and his mullet went flying through the air to bring home a big mark to set up another goal. And then ruckman turned forward Kevin Waden notched his own late game-clinching goal. With the clock ticking down and the Pirates maintaining possession, the Knights upset bid was quickly fading. Although the Knights got one late goal from Glenn, it was too little too late. The final horn sounded, and the Pirates were the newest members of the GGAFL undefeated club and the 2016 Premiers. The Pirates and Knights then shook hands, agreed that the Mavs are the worst, and thanked the greater than 100 people in attendance.

​Unfortunately for the GGAFL and for the Knights, they lost more than just the Grand Final that day. After 14 years in the GGAFL, several years at Carlton Football Club, and a lifelong membership at Collingwood Football Club, Johnny Bekiaris decided to hang up his boots following the match. Beki always put the GGAFL first. His ability to mentor new players and contribute to the league and growth of AFL in America is a true testament to what we promote here in the GGAFL and what footy in the US truly means. We wish Beki the best and cannot wait for him to change his mind next season.